Special thanks to the participants and partners of the 3rd LUMEN Conference 2017!

On 13 and 14 November, the third edition of the Conference for Leaders in University Management LUMEN 2017, combined with the gala presentation of awards for the best implemented projects and initiatives in Polish higher education, was held in Warsaw. The initiator of the LUMEN conference, and its main organizer, is PCG Academia. Substantive patronage over the project is held by the Polish Rectors Foundation, headed by Prof. Jerzy Woźnicki.

LUMEN 2017 conference was attended by almost 300 university management professionals – rectors, vice-rectors, chancellors and managers from 155 institutions throughout the country, as well as by a number of foreign guests, including a representation of the Ukrainian rectors association and representatives of the companies supporting HE sector from the United States and the United Kingdom.

The conference was solemnly opened by the President of PCG Polska – Prof. Łukasz Sułkowski. Guests were also welcomed by the CEO of the Public Consulting Group Inc. – William S. Mosakowski, the President of the Polish Rectors Foundation – Prof. Jerzy Woźnicki and the President of the Conference of Rectors of Academic Schools in Poland, Prof.Jan Szmidt. The Ministry of Science and Higher Education was represented by the Undersecretary of State, Prof. Łukasz Szumowski, and the Head of the Minister’s Office, Piotr Müller, who read a welcome letter to the guests from the Deputy Prime Minister, Jarosław Gowin.

Law 2.0 – Debate on the Conference concentrated on the practical consequences of the implementation of Law 2.0 as put forward by the Ministry of Science and Higher Education. The analysis involved both the soft aspects, i.e. leadership and autonomy, as well as the legal and financial ones and those related to the participation of third party stakeholders in university management. The discussion was attended by the main creators of the proposed changes and the representatives of the biggest academic centres throughout the country, including the Professors Wiesław Banyś, Wiesław Bielawski, Jakub Brdulak, Roman Cieślak, Jerzy Cieślik, Wojciech Czakon, Maciej Duszczyk, Andrzej Eliasz, Irena Hejduk, Marek Kwiek, Krzysztof Leja, Gohdan Macukow, Zbigniew Marciniak, Witold Orłowski, Tadeusz Pomianek, Grażyna Prawelska-Skrzypek, Arkadiusz Radwan, Jan Szambelańczyk, Jan Szmidt, Jolanta Szołno-Koguc, Marzenna Weresa, Tadeusz Więckowski, Jerzy Woźnicki and many others.

The Partners – LUMEN 2017 Conference and Competition could not be held without the participation of the event partners: Bank Zachodni WBK, implementing the Santander Universidades programme, Pearson CEE and the “Rzeczpospolita” Journal.

The “Rzeczpospolita” Journal on the LUMEN 2017 Conference and Gala 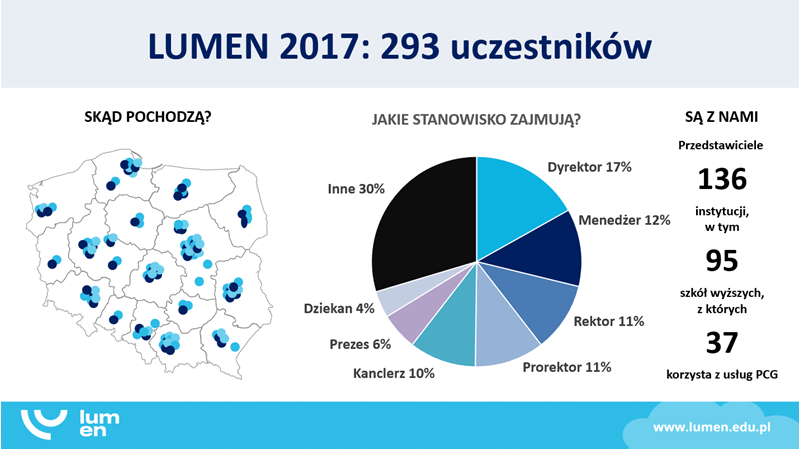 Information will be provided shortly

The Leaders in University Management Conference will take place on